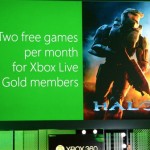 Kicking off Microsoft’s announcements, the company has said that Xbox Live will start offering free Xbox 360 games for its paying members, starting this July. In the run-up to the Xbox One’s launch, you’ll be able to pick up two titles each month, gratis — if you’re an Xbox Live Gold member. If it sounds familiar, it’s because it sounds faintly similar to what Sony’s PS Plus has offered its subscribers, albeit in a limited run. The Live UI on the older Xbox 360 console will also be getting a refresh, catching up with the more modern styling we’ve seen teased on the Xbox One. Follow our liveblog for all of the latest news from E3 2013. Filed under: Gaming , Microsoft Comments