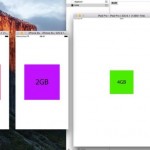 Developer Hamza Sood built a demo app that would display the amount of memory reported by difference iDevice simulators. Hamza Sood Apple doesn’t talk much about its SoCs beyond basic “chip X is Z percent faster than chip Y” comparisons—this is unfortunate, since Apple’s new chips are typically as fast or faster than the best high-end chips from Qualcomm and Intel when they’re released. One place where Apple has historically been stingy, though, is RAM. Even last year’s iPhone 6 and 6 Plus shipped with 1GB of memory, at a time when comparable Android phones were shipping with 2 or 3GB. That may be changing for the new iPhone 6S and 6S Plus , according to some sleuthing by developer Hamza Sood . Using a custom app and the iPhone 6S simulator included with the Xcode 7.1 beta, Sood has apparently confirmed that the iPhone 6Ses will include 2GB of RAM, and the developer offers more evidence pointing to 4GB of RAM for the iPad Pro. The iPad Air 2 was the first iDevice to ship with 2GB RAM, and since the new iPad Mini 4 supports Split View multitasking we can assume that it includes at least 2GB of RAM as well (Xcode doesn’t included dedicated simulators for the iPad Mini lineup, presumably since any app running on a standard iPad will look and act the same way on an iPad Mini). This isn’t a guarantee that the new iPhones will include 2GB of RAM, but Sood’s tool running in the iPhone 6 simulator does correctly state that last year’s phone has just 1GB of RAM. It’s as close to a confirmation as we can get before we actually have hardware to test with. Read 3 remaining paragraphs | Comments

California DMV will miss its deadline for driverless car regulations

Researchers create temperature sensor that runs on almost no power