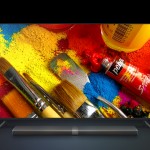 Xiaomi is more than just a phone manufacturer — it makes almost every kind of consumer electronics now, including TVs , wearables and GoPro-style action cameras . Today, the company is expanding its living room lineup with a 60-inch 4K TV , which measures 11.6mm at its thinnest point and costs only RMB 4, 999 (roughly $786). That’s a lot of display for your money, although it’s not quite as sleek as the $645 Mi TV 2S Xiaomi announced in July. Plenty of dongles and set-top boxes can transform your old TV into a “smart” one — but what if you could do away with them entirely, and get the same features out of a TV speaker instead? That’s the idea behind Xiaomi’s “Mi TV Bar, ” anyway. To the naked eye it looks like a classic soundbar, but inside there’s a MStar 6A928 processor, 2GB of DDR3 RAM and 8GB of flash storage. Once connected through the Mi Port — which also carries power — you’ll gain access to MIUI TV, Xiaomi’s Android-based smart TV platform. It’s designed to work in conjunction with the Mi TV 3, although you can also buy it separately and hook it up to any TV, monitor or projector. According to Xiaomi, a TV’s motherboard usually accounts for 20 percent of its overall cost — and it’s also a part that customers have to replace every 18 months. By taking the related components out and putting them in a separate device, Xiaomi hopes they’ll be easier to upgrade and replace — meaning you, the consumer, can just focus on buying (and keeping) a stellar display. It’s the same argument behind modern TV set-top boxes, although here you’re also getting a beefy speaker thrown in too. It’ll set you back RMB 999 ($157) on its own — for comparison, the new Apple TV costs $149 in the US, while Amazon’s 4K Fire TV is up for $100. These devices are meant for China, however, and we don’t expect either of them to be sold in the US or Europe anytime soon. Xiaomi might have online accessory stores for both of these markets, but it’s a long way off selling all of its electronic wares to the world. Source: Xiaomi

View original post here:
Xiaomi will let you replace the brains in its new smart TV