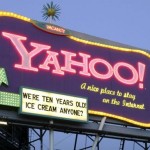 After finding its name on an NSA target list , Yahoo understandably pledged to shore up its security efforts . The plan was to encrypt all information moving between its data centers while simultaneously giving users the option to use encryption for all of its online services. Now the company says it’s almost there, explaining on its Tumblr page that data center traffic is now fully encrypted, Yahoo searches and homepage traffic defaults to HTTPS encryption and noting that webmail has been encrypted since January. Users can also encrypt Yahoo News, Sports, Finance and other services by manually adding HTTPS before the site’s URL. It’s good progress, but there’s more work to do. “This isn’t a project where we’ll ever check a box and be finished, ” Alex Stamos, Yahoo’s new security Chief , explained. “Our fight to protect our users and their data is an on-going and critical effort.” Next up? An encrypted build of Yahoo Messenger, due for release later this year. Check out Yahoo’s official Tumblr for the full security update . Filed under: Internet Comments Source: Yahoo

More:
Yahoo encrypts almost everything, says more security updates are on the way