An anonymous reader writes: “Mazda cars with next-gen Mazda MZD Connect infotainment systems can be hacked just by plugging in a USB flash drive into their dashboard, thanks to a series of bugs that have been known for at least three years, ” reports Bleeping Computer. “The issues have been discovered and explored by the users of the Mazda3Revolution forum back in May 2014. Since then, the Mazda car owner community has been using these ‘hacks’ to customize their cars’ infotainment system to tweak settings and install new apps. One of the most well-designed tools is MZD-AIO-TI (MZD All In One Tweaks Installer).” Recently, a security researcher working for Bugcrowd has put together a GitHub repository that automates the exploitation of these bugs. The researcher says an attacker can copy the code of his GitHub repo on a USB flash drive, add malicious scripts and carry out attacks on Mazda cars. Mazda said the issues can’t be exploited to break out of the infotainment system to other car components, but researchers disagreed with the company on Twitter. In the meantime, the car maker has finally plugged the bugs via a firmware update released two weeks ago. Read more of this story at Slashdot.

See the original article here:
You Can Hack Some Mazda Cars With a USB Flash Drive 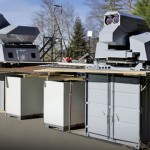 This Laser Weapon Got Five Times More Powerful in Just One...