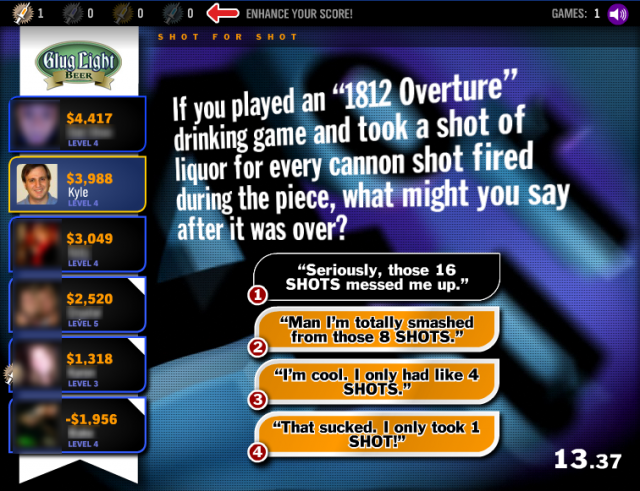 Names and faces blurred to protect my stupid friends (and that one smart one).
Jellyvision

Many of the most popular “social” games on Facebook are really the opposite of social, when you get down to it. Truly social games—the kind you play together on a couch or on a multi-player server—have you working with friends towards some common objective or working against them in a battle of skill. With many Facebook games, however, the “socializing” portion boils down to visiting a virtual dollhouse to gain a few meaningless points or spamming your friends’ walls to ask them to send you a virtual present. Meanwhile, the game is constantly bugging you to spend real money on some valueless in-game trinket or begging you to share some meaningless achievement with friends that almost assuredly have no interest. Having fun yet?

And then there’s You Don’t Know Jack, which launched on Facebook today as quite possibly the best version yet of Jellyvision’s popular, irreverent trivia series. Instead of exploiting Facebook for annoying viral marketing or addictive and vacant micro-transaction hell, the new game serves as proof that Facebook can be used to add real social competition to strong, proven game design.

If you remember the classic You Don’t Know Jack PC games from the ’90s, or have the recent console-and-PC revamp, then you know what to expect with the Facebook version. There’s still the same sharply written and voice-acted questions, the same mix of high culture and current event topics with pop culture trashiness and sophomoric humor, and the same absurdist send-ups of the staid, Jeopardy-style quiz show format. Many of the questions require you to unpack some truly obscure references just to understand what’s being asked, and trying to keep up with the never-a-dull-moment pacing is a large part of the fun.