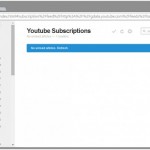 If you’re a news junky, you probably use an RSS reader like Feed.ly to keep up with stuff on the Web. One of the nicest ways to consume YouTube subscriptions was to use an RSS feed of new videos, allowing them to show up just like news articles do. You might not have noticed yet, but Google quietly shut down this feature a few days ago. The RSS feed, which used to be http://gdata.youtube.com/feeds/base/users/[username]/newsubscriptionvideos, now throws out a “403 Forbidden” error. Previously, the URL would provide a publicly accessible feed of new subscriptions from any YouTube account, provided users didn’t choose to turn off public subscription retrieval. The feed was part of the YouTube Data API v2, which was deprecated in March of this year. The replacement—predictably named YouTube Data API v3—doesn’t offer a comparable data stream. Bug reports filed for this regression as early as January 2013 have gone unanswered, save for a single response in January 2014 (yes, a year later) saying, “Patch is in the works, however we can’t comment on the expected date.” Now it’s five months later, the feature is gone, and there’s no solution in sight. Read 3 remaining paragraphs | Comments

A 2,900-Mile, Car-Free Bicycle Path Running from Maine to Florida is...