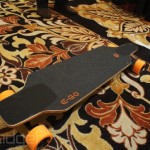 Sure, we’ve seen a number of electric skateboards out there, but we certainly won’t be turning down the chance to check out one more anytime soon. According to its creators, the E-Go Cruiser is the “lightest” electric longboard out there, and while 13.9 pounds is hardly featherweight, compared to manual longboards we’ve used in the past, it’s definitely a fair bit lighter than other electric ones we’ve tried. We would, however, have preferred some kind of handle we could use to carry it around. The bottom of the desk is covered in carbon fiber and a battery that’s surprisingly slim, as it’s built into the bottom of the board. After hopping on it for a bit, we have to say, we prefer the Zboards’ pad-based control system as opposed to the handheld remote – particularly since backing up requires you to fully stop, flip a switch and then hit the forward button. According to the rep we spoke with, the company is considering getting rid of reverse altogether. The E-Go can manage hills and should give you up to 18 miles on a charge. The company’s asking $700 for the longboard. Filed under: Transportation Comments