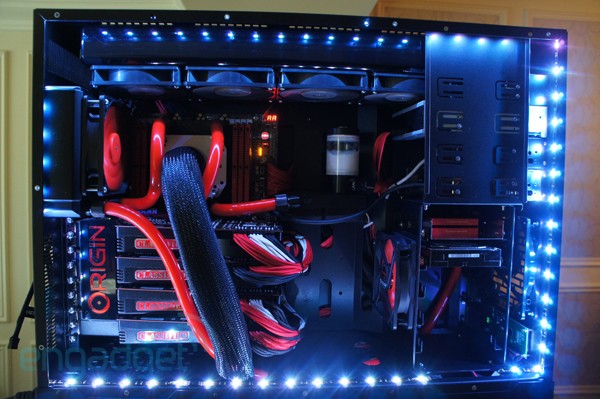 Believe it or not, we just spent 45 minutes with two of Origin PC’s founders and weren’t treated to a gaming demo. Then again, the company isn’t here at CES to brag about 3DMark11 scores. Instead, it’s showing off its new freon-based Phase Change cooling technology, which enables the Genesis desktop to be overclocked to 5.7GHz, and which pushes that desktop’s starting price from $1,337 to $4,499. So how does that $3,000 feature work? As it turns out, not unlike an air conditioner. The setup relies on a compressor to compress gas, which liquifies first and then evaporates, absorbing heat along the way. The Little Devil chassis used for the purpose of this demo has an LED screen displaying the -40-degree operating temperature, but you won’t need it: the system automatically shuts down if it gets too cold, and it won’t boot into Windows until Phase Change is up and running. In addition to all this, the Genesis uses liquid cooling around the motherboard, and an air-based system on the video cards.

While we were there, we also checked out the EON15-S and EON17-S laptops, which will be available with an updated design sometime this quarter. Though the interior should look familiar to anyone who’s ever laid eyes on a Clevo, Origin remodeled the lid, adding a matte finish option and race car-inspired molding (to evoke the idea of speed, natch). As for specs, Origin’s founders directed us to the company’s website, which suggests the internals won’t change along with the design (certainly, the prices remain the same). Expect these to start at $1,539 for the 15-incher and $1,590 for the larger model — prices that now include 24/7 free lifetime support. Find some photos below and continue on past the break for a video where you can see (and hear) that Phase Change setup in action.

A closer look at Origin PC’s Phase Change cooling system (and its new gaming laptops too) originally appeared on Engadget on Wed, 11 Jan 2012 18:36:00 EDT. Please see our terms for use of feeds.