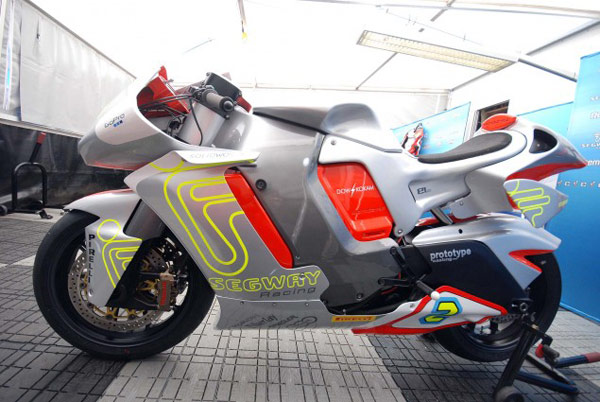 Our first peek at the MotoCzysz E1pc was at the 2010 Isle of Man TT, where the fearsome-looking e-motorbike smashed potential speed limits, even if it didn’t completely rock the two-wheeled establishment. Improvements were made in 2011, but the new 2012 model is the one that’s really poised to upset the cart. The updated E1pc’s most conspicuous changes are on the outside: it tackles the problem of wind resistance at high speeds by bringing on aerodynamic ducts and fins. Inside, torque looks to be down to 162 foot-pounds, but the equivalent to 200 horsepower (twice what we saw in 2010) should more than compensate — and a much upgraded battery cooling system should keep MotoCzysz’ creation running at full bore for considerably longer before rider Michael Rutter has to back off the throttle. That consistent speed may be even more important to MotoCzysz and Rutter than actually winning at the TT Zero race, practice for which starts June 2nd. The Isle of Man very nearly handed over a £10,000 ($15,369) prize to the team for breaking a 100MPH average speed barrier for electric bikes last year, and the substantial tweaks could make all the difference.