An anonymous reader writes: Starbreeze Studios has taken wraps off of StarVR, a new VR headset with dual displays comprising a 210 degree horizontal field of view with a total resolution of 5120×1440. The headset’s origins come from InfinitEye, a company working on a super-wide dual-display headset back in 2013 (http://bit.ly/1JNjqRy), which went into stealth mode for quite some time before being reborn as StarVR in partnership with Starbreeze Studios (http://bit.ly/1QwB0Nx). The studio is the developer behind the Payday franchise, Brothers: A Tale of Two Sons, and now ‘Overkill’s The Walking Dead’, which will have a VR component utilizing the new headset. Read more of this story at Slashdot. 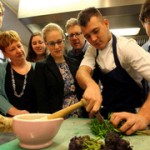