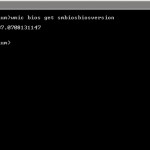 Find Your Computer’s BIOS Version From the Command Line