Taken from:
50 floating screens will clean the Pacific garbage patch next year

You Can Run Android 4.0 in Its Entirety Right on Your... 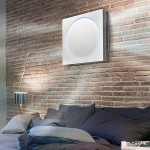 An Ultra-Flat Air Conditioner That Could Be Mistaken For Artwork