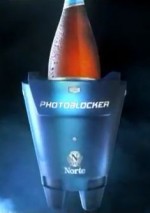 We’ve all — and by ‘we’ I mean my more inebriated co-bloggers at last year’s Christmas party — would like to avoid being photographed while relaxing in public. So this beer holder developed by the Argentine ad agency Del Campo Nazca Saatchi & Saatchi could come in handy. When a sensor built into this beer chiller detects a flash, it emits its own flash in order to overexpose any photograph:

The agency says the device, which has so far only been planted in regional bars, is a real product that has been field tested and actually works. “We placed several beer coolers in different bars in the North of Argentina,” says Maxi Itzkoff, executive creative director at Del Campo. “People took lots of photos that ended up being blurry beyond recognition and then uploaded them to social media anyway.”