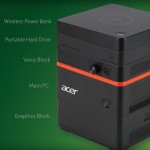 7 more images in gallery BERLIN—At IFA 2015, Acer has unveiled the intriguing Acer Revo Build, a modular mini PC that that can be upgraded with a series of stackable blocks. The NUC-like base unit, which has a footprint of just 12.5×12.5 centimetres (5×5in), comes equipped with a low-power Intel Pentium or Celeron Skylake chip , 32GB of flash storage, and 8GB of upgradeable RAM. On top of the base unit, you can stack other components like hard drives, graphics cards, and wireless charging units. The Revo Build will be released in Europe in October. Each block connects via a set of magnetically aligned pins, which should make swapping out different components easy. However, it’s not clear just how fast that interconnect is, nor whether the PC needs to be powered down to swap out blocks. That said, given that one of the blocks in development contains a graphics card upgrade, it should have plenty of speed and bandwidth on tap. Aside from the GPU block, Acer will also be offering blocks with a 500GB or 1TB hard drive, wireless charging, a speaker and microphone, and bizarrely, even a projector. Some blocks like the hard drives can be used independently of the base unit. Acer says additional blocks will be “rolled out gradually,” but there’s currently no indication how often this’ll be, or what’s coming next. Individual pricing for these units hasn’t been announced either. Read 2 remaining paragraphs | Comments

Space Dandy, from the creator of Cowboy Bebop, coming to Adult...