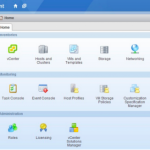 Original post:
Amazon and Microsoft, beware—VMware cloud is more ambitious than we thought