Amazon is making a Lord of the Rings prequel TV series for its Amazon Instant streaming service. The show, which already carries a multi-season commitment, will “explore new storylines preceding J.R.R. Tolkien’s The Fellowship of the Ring.” TechCrunch reports: It’s possible the new series will mine the ponderous but rich Silmarillion for material, as fan fiction writers and lore aficionados have done for decades. The exploits of the Elf-Lords of old would make for a stirring epic, while many would thrill at the possibility of seeing Moria at the height of its grandeur. So much depends on the quality of the adaptation, though. Amazon has been pretty good about its Originals, but this will be an undertaking far beyond the scope of anything its studios and partners have yet attempted. Amazon is partnering with New Line Cinema, which of course was the film company behind the much-loved trilogy that began in 2001, and the Tolkien Estate, as well as HarperCollins for some reason. The deal also “includes a potential additional spin-off series, ” presumably if it’s popular enough. Read more of this story at Slashdot.

Read the original post:
Amazon Is Making a ‘Lord of the Rings’ Prequel Series 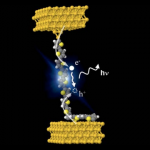 ​Why a Single-Molecule LED Could Be a Big Deal