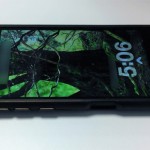 Amazon’s smartphone leaks are starting to pile up quickly, and today our own report about some of its 3D features and Android-based FIreOS operating system was followed quickly by an extensive report about the phone’s supposed specs, complete with pics of the gadget housed in a case designed to keep its final look a secret. The pics and specs come from BGR, which reports that Amazon is… Read More

Read this article:
Amazon’s Smartphone Gets Its First Spy Shots Along With Rumored Specs

‘Super Mario 64’ is an online multiplayer thanks to hero modders