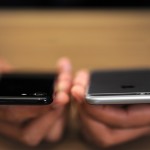 Apple is prepping up to three iPhones for a possible fall launch, including a flagship stainless steel and curved glass tenth anniversary model, according to Bloomberg ‘s Apple guru Mark Gurman. That jibes very closely with past rumors from Fast Company and others that believe Apple will release two iPhone 7s models along with a pricey high-end version. Unlike others, however, Gurman thinks the new model will not have a curved OLED display, but merely curved glass on the back and front. Recent supply leaks hinted that the next iPhone design would use a curved OLED display, but apparently Apple abandoned that idea, possibly over supply concerns. Even if it’s not curved, it’ll still have an OLED screen that takes up most of the front of the device, though. It would thus have a screen around the same size as the current iPhone 7 Plus, but crammed into a body the size of the iPhone 7. That said, Apple is apparently testing multiple devices and hasn’t quite settled on a final design. For instance, it developed one prototype that uses a dramatically curved glass back like the original 2007 iPhone, which would be appropriate for a tenth anniversary device. However, suppliers reportedly struggled to build the highly curved glass, so it has also tested a slightly larger version with an aluminum back. The one most likely to ship, however, is a device that uses subtly curved glass on both the back and front, Gurman’s sources believe. Whichever way it goes for the screen, it’s likely that Apple will use stainless steel rather than more expensive aluminum for the frame. Apple has reportedly tapped Samsung for the OLED screens and ordered up to 100 million of them, as other suppliers don’t have enough capacity to meet expected demand. The screen is said to look dramatically better than those on the current iPhone 7 models, according to Fast Co ‘s sources. As for the rest of the device, Apple is supposedly testing a vertical rather than horizontal dual-lens camera for the overhauled iPhone. It’s also trying a dual-lens front camera with a Sony sensor similar to those used on the back of the iPhone 7 Plus (above), along with the previously-reported depth sensor . Apple has been experimenting with a screen-based Touch ID fingerprint reader, but it’s not clear whether that feature will make it into the next-gen iPhone. It has also been testing a 10-nanometer processor that would be more powerful and efficient, giving the device decent battery life without expanding its battery size over past models. Much of this information isn’t new, but Gurman has one of the best track records for predicting new Apple devices, so the report helps further clarify its plans. It seems that Apple still hasn’t settled on an exact design for the iPhone 8 or X, or whatever the next-gen device will be called. Even if the company does unveil it this fall (which seems a stretch if all this is accurate), don’t count on buying one immediately afterwards — it could take several months for Apple to get all the parts it needs, Bloomberg says. Source: Bloomberg

This Is What Millions of Hungry Jellyfish Sound Like