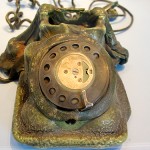 In Android Anti-forensics: Modifying CyanogenMod Karl-Johan Karlsson and William Bradley Glisson present a version of the Cyanogenmod alternate operating system for Android devices, modified so that it generates plausible false data to foil forensic analysis by law enforcement. The idea is to create a mobile phone that “lies” for you so that adversaries who coerce you into letting them take a copy of its data can’t find out where you’ve been, who you’ve been talking to, or what you’ve been talking about. I’m interested in this project but wonder about how to make it practical for daily use. Presently, it maintains a hidden set of true data, and a trick set of false data intended to be fetched by forensic tools. Presumably, this only works until the forensic tools are modified to spot the real data. But you can conceptually imagine a phone that maintains a normal address book and SMS history, etc — all the things that are useful to have in daily use — but that, on a certain signal (say, when an alternate unlock code is entered, or after a certain number of failed unlock attempts) scrubs all that and replaces it with plausible deniability data. Obviously, this kind of thing doesn’t work against state-level actors who can subpoena (or coerce) your location data and call history from your carrier, but those people don’t need to seize your phone in the first place. Read the rest

View post:
Anti-forensic mobile OS gets your phone to lie for you

XPrize winner says its Tricorder is better than ‘Star Trek’

Majority of Enterprise Customers Finally ‘Migrating Away From Windows XP’