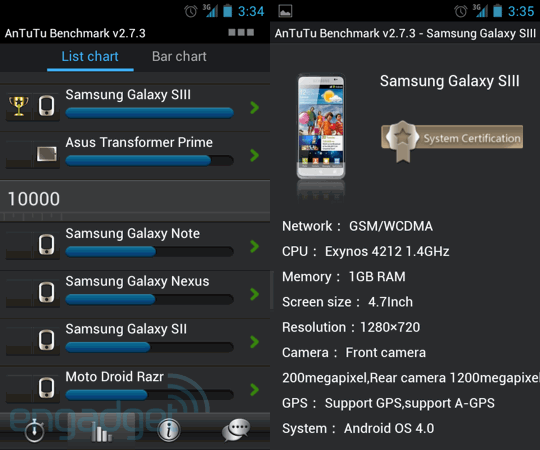 Ah, the Galaxy S III. We always knew it’d be a keystone among Android smartphones, but according to the AnTuTu benchmark suite, it’ll be the one device to rule them all. While there’s no way to verify whether this test is indeed legitimate, all Android users may currently peep the AnTuTu app, which not only shows the smartphone as having bested the mighty Transformer Prime tablet, but it also reveals the most comprehensive set of specs we’ve yet seen for the Galaxy S III — again, take this with a grain of salt. The device is said to wield a Samsung Exynos 4212 SoC with a dual-core 1.4GHz CPU, 1GB of RAM and a 4.7-inch, 720p HD display. This lines up similarly with the product listing from Amazon Germany, as the specs also reveal a 12 megapixel primary camera on the rear, along with a 2MP shooter on the front. No big surprises for the OS, which is listed as Android 4.0. Should the benchmark tests turn out to be legitimate, the HTC One X will no doubt have some very stiff competition.

AnTuTu pegs Galaxy S III as most powerful Android device, potentially reveals its specs originally appeared on Engadget on Wed, 25 Apr 2012 18:57:00 EDT. Please see our terms for use of feeds.