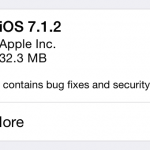 Andrew Cunningham Apple today released iOS 7.1.2, the second minor update to iOS 7.1 . The list of changes is short and focused mainly on minor bugs—it “improves iBeacon connectivity and stability,” patches a security hold whereby at-rest e-mail attachments could be accessed by an attacker if he or she had physical access to your phone, and fixes a problem with data transfers from accessories “including barcode scanners.” The e-mail attachment bug is probably the most important thing addressed by the update—it was reported widely back in April when Andreas Kurtz wrote about it on his blog . Kurtz was able to access e-mail attachments using standard tools on several different iOS devices running versions 7.1.1 and 7.0.4. As part of the iBeacon update, iOS 7.1.2 also re-enables Bluetooth on iOS devices, which we verified on an iPhone 5S by disabling Bluetooth before installing the update. Read 1 remaining paragraphs | Comments