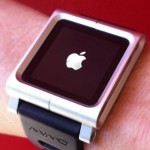 A sixth-generation iPod Nano embedded in a watch band. Aaron Muszalski Re/code is reporting that Apple will introduce a wearable device on September 9 alongside two next-generation iPhones. Such a device from Apple has been highly anticipated since the wearable market received newcomers from Samsung, LG, and Motorola . Apple’s entry into this market was originally expected sometime in October based on an earlier report from Re/code. The site has had a good track record of correctly predicting the timing of Apple product releases since the AllThingsD days. John Paczkowski, who reported the news, says that the coming device will certainly be equipped to make use of Apple’s HealthKit platform for its Health app, as well as HomeKit, which is a platform to connect devices to smart appliances and light bulbs. Read 1 remaining paragraphs | Comments