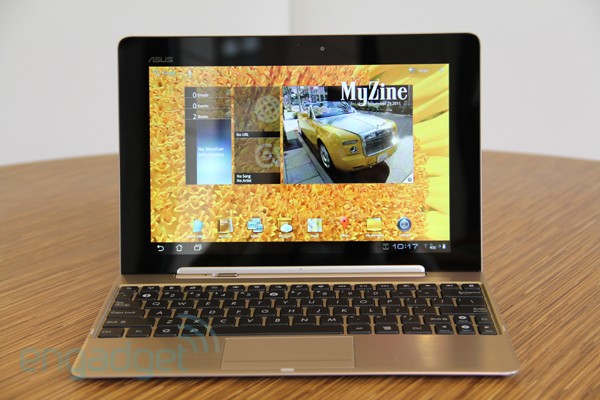 Is there any tablet that’s hotter than the Transformer Prime right now? (Please, don’t say the Kindle Fire.) For weeks we geeks, early adopters and people who love their tech toys have been awaiting this, and none too patiently. Make no mistake: this will be one of the slickest products we test this year and it isn’t just because the original Transformer had such an inventive design. The Prime is the first device packing NVIDIA’s hot-off-the-presses Tegra 3 SoC, making it the world’s first quad-core tablet. This comes with promises of longer-than-ever runtime and blazing performance (five times faster than Tegra 2, to be exact), all wrapped in a package measuring just 8.3mm (0.33 inches) thick — even skinnier than the iPad 2 or Galaxy Tab 10.1. Throw in specs like a Super IPS+ Gorilla Glass display, eight megapixel rear camera and a confirmed ICS update in the pipe and even we seen-it-all Engadget editors were drooling.

All of which means we dropped just everything when a 32GB Prime showed up on our doorstep earlier this week, and soon enough, you’ll have your chance to nab one too. ASUS announced today that the WiFi-only models will be available through online sellers the week of December 19th, and in retail the week after. (No word yet on 3G versions for the US just yet.) It’ll start at $499 for the 32GB model — not bad considering five hundred bucks is the going rate for a high-end tablet with 16GB of storage. From there you can get a 64GB number for $599, while that signature keyboard dock will set you back a further $149. Worth it? Read on to find out.