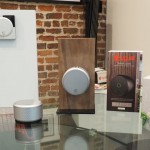 August Home Inc, makers of the August Smart Lock , announced the forthcoming release of three new products as well as a new service at a press event in San Francisco today. The new product lineup includes a second-generation Smart Lock, a Smart Keypad and a Smart Doorbell Camera. The lock itself offers a number of design improvements over its predecessor including a magnetic faceplate that won’t pop off every time you manually engage the lock as well as a stainless steel indicator on the lock sleeve. Plus, being Homekit-enabled, the new Smart Lock will allow users to issue voice commands through Siri rather than opening the app itself. It’s available for order today and will retail for $230. The older generation locks will be discounted to an even $200. The weather-proofed keypad will make granting temporary access to service providers (say, the delivery guy or your dog walker) much easier. Instead of forcing folks to download the August app just to use a one-time Bluetooth code, users will be able to program a 4 – 6 digit PIN into the keypad themselves and then share the code via text message or what-have-you. And, like the older shared BT codes, these PINs can be set to last for as many hours, days or uses as you’d like. The keypad will retail for $80 when it becomes available in the next few weeks. The Doorbell Cam is also weather-proofed, Wi-Fi enabled and pretty darn clever. It’s equipped with a standard motion detector but will also turn on the camera when it detects movement near the door. So instead of issuing a push notification every time a car drives past your house, the motion detector will also turn on the Wi-Fi camera (which is equipped with human-detection software) to ensure that the movement is actually a person standing on your stoop, not just parking at the curb. The camera will retail for $200. What’s more, the camera integrates with the rest of the August devices allowing you to remotely unlock your door for the delivery guy and record both him entering and exiting the residence. This ensures that he doesn’t swiped stuff from your house while dropping a package in the foyer. Plus, this way, you’ll never miss a delivery. The only drawback is that the camera is powered by your existing doorbell wiring so if you don’t have a doorbell already installed on your door (like me) you are SOL. Finally, August is expanding the scope of its temporary access system to allow services, not just individuals access to your door. “We’re announcing a new service that we call Access, ” August co-founder Jason Johnson told Engadget . “Probably the best way to describe it is, much like, new transportation apps like Uber helps consumers find service providers [in this case, drivers for hire – ed.] are in third party transportation logistics, we’re in third party service logistics. We help consumers find services that have integrated with our platform and we help them connect in a trusted and secure way.” The company announced 12 initial launch partners today including Sears, Postmates, Pro.com, Handy, Fetch, Shyp, BloomNation, Envoy, Rinse, HelloAlfred, Wag!, Pillow, and Doorman. Instead of having to give partial access to a delivery person every single time you order from Postmates, users will be able to grant access to Postmates the company. This may seem like a security issue however it’s not that far off from what many August users already do with trusted service partners like these. Plus, the lock maintains copious logs about who opened which August-locked door with which access code so tracking down the responsible party should your valuable go missing during a delivery will be a piece of cake.