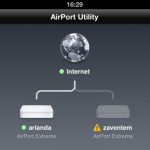 For a while, it seemed that Wi-Fi was becoming a victim of its own success. In many cities, there are numerous active Wi-Fi networks on those preciously few non-overlapping channels—that’s in addition to microwaves, bluetooth, cordless phones, and baby monitors, which all share the 2.4GHz band. But since about 2007, Apple has also built support for 802.11n Wi-Fi on the 5GHz band into its computers and Airport line of Wi-Fi base stations. Now, the iPhone 5 and the latest iPod touch also have that support. (The iPad has had it since day one.) So, how do you set up a Wi-Fi network that makes the most of this confluence of Wi-Fi bands? Not created equal First of all, it’s important to realize that the two bands are created very differently. The 2.4GHz band suffers from lack of non-overlapping channels and interference from other devices. But the lower frequencies pass through walls and floors reasonably well. The 5GHz band on the other hand, has a much larger number of channels—and they don’t overlap—but the higher frequencies have reduced range, even in open air. In addition to this, Apple only supports using two channels as a single, double-speed wide channel in the 5GHz band. If all else is equal, 5GHz is twice as fast as 2.4GHz. Read 12 remaining paragraphs | Comments

More:
Best of both worlds: Setting up Wi-Fi for iOS on 2.4 and 5GHz