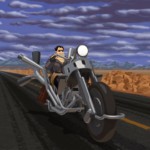 It’s been a few months since Tim Schafer’s classic LucasArts adventure game Full Throttle got an HD remastered release on PS4, PS Vita and PC. Today, it comes out on iOS: For $5, you can take a rowdy ride into gaming history. Just like the last Schafer gem Double Fine restored , players will be able to switch between the original and fully refreshed versions in Full Throttle Remastered . The app version also includes concept art and commentary by the game’s creators. But as Schafer explained to Engadget at this year’s GDC, they didn’t re-record a single line of dialogue. “The original voice actor, Roy Conrad, has passed away since we made this game, ” he said. “He’s irreplaceable, I think, as Ben Throttle. We wanted to just kind of do the Blu-ray version, if you will. The nicest version of his voice.” Source: Full Throttle Remastered (App Store)