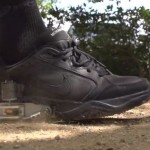 Undergraduate mechanical engineering students at Rice University built a shoe that recovers and stores energy generated by walking. This energy could be used to power small electronic devices, such as cell phones: The Agitation Squad – Carlos Armada, Julian Castro, David Morilla and Tyler Wiest – decided last fall to focus their attention on where the rubber meets the road to create a shoe-mounted generator. Another device to draw energy from the motion of the knee had already been developed and patented and led them to analyze other sources of energy. Working with the Motion Analysis Laboratory at Shriners Hospital for Children in Houston, the team determined the force at the heel delivered far more potential for power than any other part of the foot. “We went to the lab and saw the force distribution across the bottom of your foot, to see where the most force is felt,” Morilla said. “We found it would be at the heel and at the balls of your toes, as you push off. We went with the heel because, unless you’re sprinting, you’re letting gravity do the work.” […] The prototypes deliver an average of 400 milliwatts, enough to charge a battery, in benchtop tests (and a little less in walking tests, where the moving parts don’t move as far). They send energy through wires to a belt-mounted battery pack. A voltage regulator keeps it flowing steadily to the battery. The PediPower hits the ground before any other part of the prototype shoe. A lever arm strikes first. It is attached to a gearbox that replaces much of the shoe’s sole and turns the gears a little with each step. The gears drive a motor mounted on the outside of the shoe that generates electricity to send up to the battery. You can watch a video of their device at the link. Link -via Inhabitat