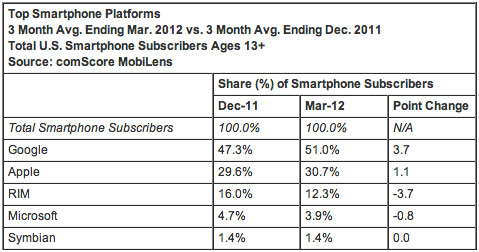 The March smartphone market share tally for the US is in from comScore, and it paints a familiar picture that’s rosy for Apple, Google and Samsung, but not so flush-cheeked for everyone else. Android is still tops and jumped almost four points to 51 percent of new American buyers. Apple’s still riding high after shipping 35.1 million iPhones, however, and moved up to 30.7 percent. As is often becoming the case, it was Microsoft and RIM that took the biggest hit, with the BlackBerry dropping as much as Android gained and tumbling down to 12.3 percent.

A total of 106 million Americans had a smartphone, nine percent higher than in December, and that was mirrored in the hurt dealt out among total cellphone market share. Outside of Samsung’s gangbuster run in smartphones keeping it on top at 26 percent, the only other company to move up as an individual cellphone brand was Apple, which staked out 14 percent of the US cellphone space for itself. HTC, Motorola and LG are all shedding market share, with HTC no doubt hoping that the One X and One S will turn its fortunes around pretty soon.

Visit link:
comScore: Android tips the 51% mark in US share, iPhone nips its heels with 31%