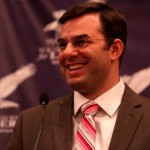 Rep. Justin Amash (R-MI) sponsored the amendment that led to today’s close vote. Gage Skidmore / flickr A critical vote for intelligence funding today showed that Congress is sharply divided on the issue of NSA domestic surveillance. This afternoon, the House of Representatives narrowly shot down an amendment that would have stopped the NSA from engaging in any warrantless collection of telephone data on a 217-205 vote. The amendment was sponsored by Rep. Justin Amash (R-MI) and co-sponsored by John Conyers (D-MI). The summary of the amendment read: Ends authority for the blanket collection of records under the Patriot Act. Bars the NSA and other agencies from using Section 215 of the Patriot Act to collect records, including telephone call records, that pertain to persons who are not subject to an investigation under Section 215. Amash and Conyers sponsored a similar bill several weeks ago, but there’s been little movement on it. Their strategy this week was to propose the change as an amendment to a $600 billion defense spending bill being considered this week. That strategy quickly pushed the surveillance issue to the House floor. Read 8 remaining paragraphs | Comments 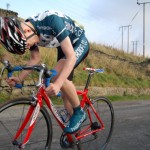