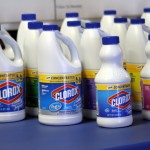 Bleach those bits away. (credit: Adina Firestone ) A system administrator with Platte River Networks, the company that took over hosting Hillary Clinton’s mail server after it was moved out of her basement in Chappaqua, has been the target of a crowdsourced investigation on Reddit into whether he took part in a conspiracy to cover up Clinton’s e-mails. Paul Combetta, an employee of Platte River Networks who was granted immunity from prosecution by the Justice Department in exchange for cooperation with the FBI’s investigation of Clinton’s e-mails, apparently went to Reddit for help with a sticky problem related to the e-mail investigation by the House Select Committee on Benghazi—scrubbing the e-mails of Clinton’s personal address. While the post doesn’t provide evidence that Clinton herself instructed Combetta to erase her e-mails, it does suggest that his staff wanted to excise her private e-mail address from the archives to be turned over to the State Department—ånd in turn, to the House Select Committee. The later destruction of the e-mails during the continuing investigation was apparently, as Combetta told investigators, an “oh-shit moment.” Read 8 remaining paragraphs | Comments

More here:
Conspiracy! The Reddit rundown on the man who deleted Clinton e-mails

That Massive IRS Hack Was Way More Massive Than We Thought