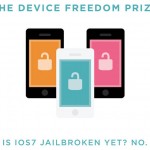 Elizabeth Stark writes, “We’re pleased to announce the Device Freedom Prize : a crowdfunded reward for the first developer(s) who release an open source iOS 7 jailbreak. Providing users the ability to control their devices is crucial in an age where we’re increasingly dependent on our mobile phones. An open source jailbreak provides users the capability to install what they want on their own devices, the ability to audit the code they’re using to do so, and enables disabled users to more easily use their devices .” “We’ve assembled a judging panel of awesome folks that care a lot about these issues, including Boing Boing’s own Cory Doctorow; Kyle Wiens, CEO of iFixit; Biella Coleman, Professor and Author of Coding Freedom, and Chris Maury, Accessibility Advocate. Contribute to the prize to help make an open source iOS jailbreak a reality.” Is iOS7 jailbroken yet? ( Thanks, Elizabeth ! )

Taken from:
Crowfunded prize for first open jailbreak of Ios 7