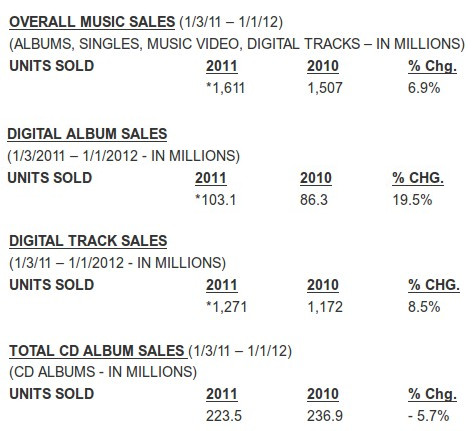 That sharp sucking of air you heard at the end of 2010, well, that was the record industry wincing as sales of CDs continued to tumble while digital media sales remained flat. The relieved exhale that you just heard echoing through the atmosphere? That was the collective sigh of executives who just picked up the latest Nielsen report indicating that digital music sales are on the rise again and, for the first time ever, have finally surpassed physical media. Sales as a whole were up, but while CDs were down 5.7 percent, digital track sales were up 8.4 percent and digital albums a stunning 19.5 percent (perhaps most interestingly, though, vinyl was up over 36 percent). CDs still outsell virtual albums by a factor of two, but it’s clear the trend toward binary media is back on track. It may be a narrow victory but, with 50.3 percent of the market, audio files are new king of the hill. Check out the full report at the source.