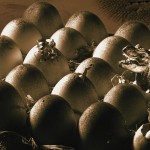 The eggs of some dinosaurs took much, much longer to hatch than the eggs of their avian relatives and descendants — and it could have contributed to their demise. A team of researchers from various institutions examined the embryonic tooth from a soccer-ball-sized egg. It was laid by a 30-foot-long duck-billed non-avian dinosaur called Hypacrosaurus that’s closely related to reptiles like crocodiles. By calculating the daily growth markers in the teeth, they discovered that the animal’s eggs take around six months to hatch. It’s also likely that the bigger the egg, the longer the incubation time. In comparison, ostrich chicks burst out of their shells after only 42 days, and smaller birds have even shorter incubation periods. A longer incubation time means non-avian dinosaurs were definitely at a disadvantage when an asteroid or a comet slammed into our planet 65 million years ago. Since it took much longer for them to reproduce and to replace the population that perished in the impact, their incubation period could be one of the factors that led to their extinction. Meanwhile, the birds that already existed in that era that didn’t need the same amount of time to hatch thrived and led to the birds we know today. That said, their long incubation period is only one of the factors why they died out. Lead researcher Gregory M. Erickson of Florida State University said: “These animals were profligate wasters of energy. They were big and warmblooded and even the smallest dinosaurs took over a year to mature. The dinosaurs found themselves holding some bad cards. They had a dead man’s hand.” Source: The New York Times

Hackers May Have Stolen Credit Card Data From 51 UPS Stores...