Enlarge / The announcement of the Creators Update in October 2016. For consumers, next spring’s Windows 10 Creators Update is going to bring integrated virtual reality and 3D creativity. Today, Microsoft described what it will have to offer to enterprise customers. The Anniversary Update added Windows Defender Advanced Threat Protection (ATP) that extended the Defender anti-malware to include cloud-based intelligence to detect anomalous behavior. Microsoft gave us a real-world example of this: a previously unknown (and hence, able to bypass antivirus software) cryptolocker variant was noticed to be deleting System Restore points prior to encrypting user data. This is an unusual thing for a piece of software to do, so much so that it was flagged, enabling the infected system to be isolated and the malware dealt with. This ATP has also been integrated with Office 365 so that, for example, a malicious file can be correlated with the e-mail it was sent in. Read 7 remaining paragraphs | Comments

Taken from:
Enterprise has a lot to look forward to with Windows 10 Creators Update 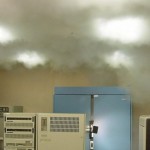 It came from the server room: Halloween tales of tech terror