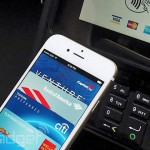 The roster of credit cards that work with Apple’s mobile payments platform has always had one notable absentee. Thankfully, the folks at Discover have realized that there’s little to be gained from not being available to use on Apple Pay . That’s why the firm has signed a deal that’ll see its customers be able to buy goods and services with their iPads, iPhones and Apple watches, which will begin at some point in the fall. Naturally, users are afforded the same offers and protections that they would if they’d paid by card, including Cashback Bonus and Freeze It — now all we need is for Chipotle to join in and we’re all set. Filed under: Cellphones , Internet , Apple Comments Via: MacRumors Source: Businesswire

See the original article here:
Every major US credit card will soon work with Apple Pay

FAA Warns of GPS Outages This Month During Mysterious Tests on...