The ACLU has spent years in court trying to get a look at a top-secret FBI interrogation manual that referred to the CIA’s notorious KUBARK torture manual. The FBI released a heavily redacted version at one point — so redacted as to be useless for determining whether its recommendations were constitutional. However, it turns out that the FBI agent who wrote the manual sent a copy to the Library of Congress in order to register a copyright in it — in his name! (Government documents are not copyrightable, but even if they were, the copyright would vest with the agent’s employer, not the agent himself). A Mother Jones reporter discovered the unredacted manual at the Library of Congress last week, and tipped off the ACLU about it. Anyone can inspect the manual on request. Go see for yourself! The 70-plus-page manual ended up in the Library of Congress, thanks to its author, an FBI official who made an unexplainable mistake. This FBI supervisory special agent, who once worked as a unit chief in the FBI’s counterterrorism division, registered a copyright for the manual in 2010 and deposited a copy with the US Copyright Office, where members of the public can inspect it upon request. What’s particularly strange about this episode is that government documents cannot be copyrighted. “A document that has not been released does not even need a copyright,” says Steven Aftergood, a government secrecy expert at the Federation of American Scientists. “Who is going to plagiarize from it? Even if you wanted to, you couldn’t violate the copyright because you don’t have the document. It isn’t available.” “The whole thing is a comedy of errors,” he adds. “It sounds like gross incompetence and ignorance.” Julian Sanchez, a fellow with the libertarian Cato Institute who has studied copyright policy, was harsher: “Do they not cover this in orientation? [Sensitive] documents should not be placed in public repositories—and, by the way, aren’t copyrightable. How do you even get a clearance without knowing this stuff?” You’ll Never Guess Where This FBI Agent Left a Secret Interrogation Manual [Nick Baumann/Mother Jones] ( via Techdirt ) ( Image: FBI , a Creative Commons Attribution Share-Alike (2.0) image from 10542402@N06’s photostream )

Fix the DMCA! Repeal anti-circumvention and truly own your devices 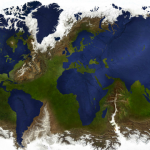 What Earth would look like with its oceans and landmasses swapped