The world’s first floating offshore wind farm began delivering electricity to the Scottish grid today. “The 30MW installation, situated 25km (15.5mi) from Peterhead in Aberdeenshire, Scotland, will demonstrate that offshore wind energy can be harvested in deep waters, miles away from land, where installing giant turbines was once impractical or impossible, ” reports Ars Technica. “At peak capacity, the wind farm will produce enough electricity to power 20, 000 Scottish homes.” From the report: The installation, called Hywind Scotland, is also interesting because it was built by Statoil, a Norwegian mega-corporation known for offshore oil drilling. Statoil has pursued offshore wind projects in recent years, using the companyâ(TM)s experience building and managing infrastructure in difficult open sea conditions to its advantage. Hywind Scotland began producing power in September, and today it starts delivering electricity to the Scottish grid. Now, all that’s left is for Statoil and its partner company Masdar to install a 1MWh lithium-ion battery, charmingly called âoeBatwind, â on shore. Batwind will help the offshore system regulate power delivery and optimize output. After a number of small demonstration projects, the five 6MW turbines are the first commercial turbines to lack a firm attachment to the seafloor. They’re held in place using three giant suction anchors, which are commonly used in offshore oil drilling. Essentially, an enormous, empty, upside-down âoebucketâ is placed on the seafloor, and air is sucked out of the bucket, which forces the bucket downward, further into the seafloor sediment. The report mentions a 2013 video that shows how offshore wind farms work. Read more of this story at Slashdot. 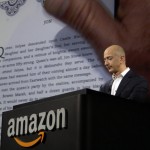 Amazon runs the numbers to convince you that e-books should be...