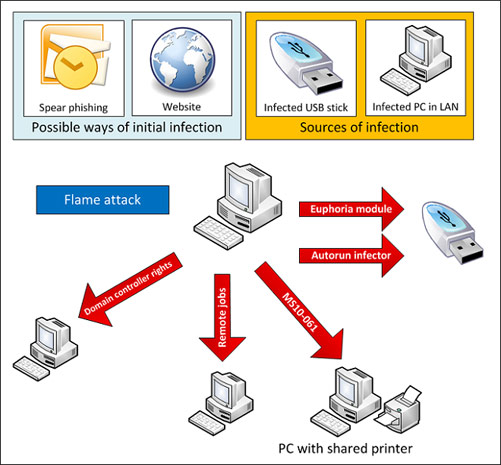 Much ado was made when security experts found Stuxnet wreaking havoc, but it’s looking as though the malware was just a prelude to a much more elaborate attack that’s plaguing the Middle East. Flame, a backdoor Windows trojan, doesn’t just sniff and steal nearby network traffic info — it uses your computer’s hardware against you. The rogue code nabs phone data over Bluetooth, spreads over USB drives and records conversations from the PC’s microphone. If that isn’t enough to set even the slightly paranoid on edge, it’s also so complex that it has to infect a PC in stages; Flame may have been attacking computers since 2010 without being spotted, and researchers at Kaspersky think it may be a decade before they know just how much damage the code can wreak.

No culprit has been pinpointed yet, but a link to the same printer spool vulnerability used by Stuxnet has led researchers to suspect that it may be another instance of a targeted cyberwar attack given that Iran, Syria and a handful of other countries in the region are almost exclusively marked as targets. Even if you live in a ‘safe’ region, we’d keep an eye out for any suspicious activity knowing that even a fully updated Windows 7 PC can be compromised.

Flame malware snoops on PCs across the Middle East, makes Stuxnet look small-time originally appeared on Engadget on Mon, 28 May 2012 17:07:00 EDT. Please see our terms for use of feeds.