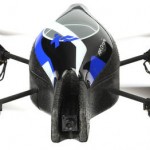 At the latest San Francisco Drone Olympics (now called DroneGames, thanks, no doubt, to awful bullying from the organized crime syndicate known as the International Olympic Committee), there were many fascinating entries, but the champion was James “substack” Halliday’s Virus-Copter (github), which made wireless contact with its competitors, infected them with viruses that put them under its control, sent them off to infect the rest of the cohort, and then caused them to “run amok.” Many people have written to point out that Virus-Copter shares some DNA with one of the plot elements in my novel Pirate Cinema , but I assure you the resemblance is entirely coincidental. Drones, after all, are stranger than technothrillers. Here’s the $300 drone the competitors were flying. The payload virus.tar includes: node cross-compiled for the ARM chips running on the drones * felixge’s ar-drone module * some iwconfig/iwlist wrappers in lib/iw.js * open wireless networks in nodes.json (gathered by the deployment computer) Report from the DroneGames (formerly Drone Olympics ;-))

A ‘Roomba’ for weeds