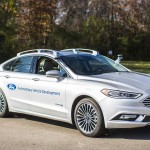 Ford has shown the first images of its new self-driving Fusion Hybrid with a more powerful computer and improved, better-integrated sensors. It uses an upgraded version of the Fusion Hybrid platform, bolstered by self-driving hardware, a large new computer and electrical controls that “are close to production-ready, ” the company said in a press release . It also packs lower-profile LIDAR units that appear to be the ” Puck ” models from Velodyne, a company in which it recently invested $150 million . Cameras and other bits are smoothly built into the roof, making the hybrid less “hey, look at me, I’m a self-driving car” than other models. By contrast, the last autonomous Fusion model used since 2013 featured no less than four bulky LIDAR units. Ford was able to cut the number to two, while still giving the vehicle wider and better targeted vision. The hefty computer installed in the trunk (see the video, below) can process a terabyte of data in an hour to do navigation, object recognition, AI and computer vision, among other chores. The new Fusion is a step towards a “high-volume, fully autonomous SAE level 4-capable vehicle by 2021, ” a goal Ford revealed earlier this year. (SAE level-4 cars are fully autonomous in set geographic zones like college campuses, while level 5 means a vehicle can drive anywhere by itself.) The automaker plans to build 90 of the vehicles and test them in Arizona, California and Michigan over the next few years. Source: Ford