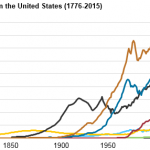 (credit: US EIA ) With the 4th of July weekend about to begin, the US Energy Information Administration decided to look back to our nation’s founding. So it plotted the country’s energy use starting from 1776 . Most of the result isn’t a surprise: biomass had a long run before fossil fuels took over and stayed on top. But recent years have seen the biggest change since nuclear was added to the mix. Biomass spent nearly a century on top of the US energy mix before being displaced by coal, although it never went above providing four quadrillion Btus (each Btu is a bit over 1,000 Joules). But biomass never entirely went away, and its resurgence this century puts it at its highest level ever. With nuclear holding steady and renewables surging to nearly the same level as hydropower, fossil fuels are on the verge of dropping below 80 percent of the US’ energy mix. Fossil fuels haven’t been that low a percentage for over a century. Read 2 remaining paragraphs | Comments

Original post:
Fossil fuel use in US is at its lowest percentage in over a century

Beautiful film on a Buddhist ritual only 46 monks have completed