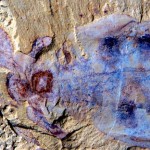 The new species, showing the eyes (upper and lower center) and a single clawed appendage (top left). Peiyun Cong The animals of the Cambrian are noted for being a collection of oddballs that are sometimes difficult to match up with anything currently living on Earth. But even among these oddities, Anomalocarids stand out (as their name implies). The creatures propelled themselves with a series of oar-like paddles arranged on their flanks, spotted prey with enormous compound eyes , and shoveled them into a disk-like mouth with large arms that resided at the very front of their bodies—although some of them ended up as filter feeders . We’ve identified a large number of anomalocarid species, many of which appear to have been the apex predators of their ecosystems. Yet for all our knowledge of them, there’s a key issue we haven’t clarified: how do they relate to any species that might exist today? New fossils from a Cambrian era deposit in China have revealed three samples of a new species that are so exquisitely preserved that their discoverers can trace the animals’ nerves. And the structure of the brain reveals affinities for two completely different types of organisms. The new species, Lyrarapax unguispinus , is a relatively small anomalocarid  at only about eight centimeters long. Like others of this group, it’s got a set of distinctive features, such as a neck, large compound eyes, and large frontal appendages, in this case shaped a bit like claws. Just past the neck, it’s got two large segments that look a bit like the fins on the sides of animals like dolphins. Read 6 remaining paragraphs | Comments 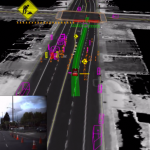 Google Shows How Its Self-Driving Cars Are Getting Smarter With 700K... 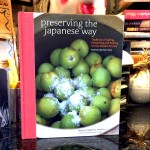 Perserving the Japanese Way: Traditions of Salting, Fermenting and Pickling for... 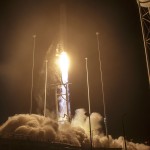