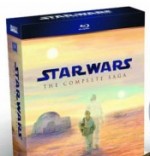 Fans are excited that the complete Star Wars saga is coming out on Blu-ray. However there are some concerns as Lucas has indicated he will include “surprises.” Some of these may be technical upgrades of audio and visual elements, but some will be disappointed that the original theatrical versions will not be included as well.

The updates include some basic tweaks. The frame size will be adjusted for The Phantom Menace; so you can get more of the movie on your screen. The transfer technology has gotten better since 1999, so the the image can transfer more completely. Color timing is fixed in the original trilogy, and visual mistakes and debris were removed. Finally, the audio files have been cleaned up for the original trilogy. Sounds have been equalized, especially for A New Hope.