An anonymous reader writes: One of the hot areas of semiconductor research right now is the creation of so-called neuromorphic chips — processors whose transistors are networked in such a way to imitate how neurons interact. “One way of building such transistors is to construct them of lasers that rely on an encoding approach called “spiking.” Depending on the input, the laser will either provide a brief spike in its output of photons or not respond at all. Instead of using the on or off state of the transistor to represent the 1s and 0s of digital data, these neural transistors rely on the time intervals between spikes.” Now, research published in Nature Scientific Reports has shown how to stabilize these laser spikes, so that they’re responsive at picosecond intervals. “The team achieved this by placing a tiny piece of graphene inside a semiconductor laser. The graphene acts as a ‘saturable absorber, ‘ soaking up photons and then emitting them in a quick burst. Graphene, it turns out, makes a good saturable absorber because it can take up and release a lot of photons extremely fast, and it works at any wavelength; so lasers emitting different colors could be used simultaneously, without interfering with each other—speeding processing.” Read more of this story at Slashdot.

Do Apple and Google Sabotage Older Phones? What the Graphs Don’t... 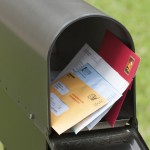 USPS will email you images of what’s in your mailbox