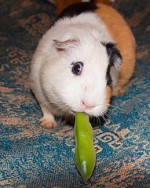 Guinea pigs and other small mammals don’t do well as solitary pets. They need at least one companion or they get lonely. Guinea pig owners know this, but the Swiss government takes it very seriously. In Switzerland, it’s illegal to keep a single guinea pig, which causes a potentially endless problem:

[…] the owner would have to purchase a new, probably younger guinea pig as a companion to the ageing survivor, whose eventual death would force the purchase of yet another guinea pig, locking the owner into an endless cycle of guinea pig purchases in order to adhere to Swiss law — even though he or she may only ever have wanted one guinea pig in the first place.

Animal lover and entrepreneur Priska Küng found a solution. She owns eighty guinea pigs and rents them out to owners of solitary pigs, who can return them after their own pigs has passed on:

She takes 50 Swiss francs (€41) for a castrated male and 60 francs for a female, “as a deposit,” Küng explains. In effect, she sells the animals but pays back half the purchase price when they are returned. The job of the leased rodents is to cheer up companions in their twilight years.

Some return after just a few poignant weeks, others after months, but some stay away for years. “Sometimes people realize that they still get so much enjoyment from the guinea pigs that they want to go on keeping them and come back for another one once their supposed last pet has died,” says Küng.