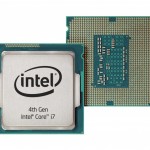 Intel is announcing the first of its fourth-generation Core processors based on the “Haswell” architecture. Intel Intel has been releasing information about Haswell, its next-generation CPU architecture, for months now. Our coverage has already been fairly extensive—we’ve already got a nice overview of Haswell’s CPU architecture itself, along with a primer on its brand-new integrated GPUs . All we need to know now is specific product information, and Intel is finally giving us our first official taste of that today. This morning’s announcements revolve around high-end quad-core chips in the Core i7 and Core i5 families, 12 for desktops and ten for laptops. If you’re looking for specific information about U- and Y- series low-voltage chips for Ultrabooks or anything belonging to the Core i3, Pentium, or Celeron families, you’ll have to wait a little while longer. We’ll be sure to pass that information along as we have it. What we’ll do here is present a high-level recap of the CPU, GPU, and chipset enhancements Intel is introducing in Haswell. After that, we’ll break down the specific CPUs that Intel is announcing today, and the kinds of systems you’re likely to find them in. Note that all of this information is coming directly from Intel—they’re not going to out-and-out make things up, but they’re definitely going to present their CPUs in the best possible light. We’ll be putting all of the below performance claims to the test as we begin to review Haswell-based systems later this summer. Read 30 remaining paragraphs | Comments