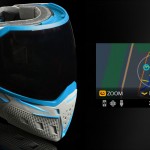 Recon Instruments , the Canadian wearables outfit purchased by Intel last year, has released a heads-up display for paintball enthusiasts. Much in the same way Recon partnered with Oakley to produce its Airwave sports goggles , the firm has teamed up with Empire Paintball to create the Empire EVS. The device uses the game guts as the Airwave — a technology known as Snow2 — albeit in a new mask that’s designed to withstand the rigors of paint-based conflict. According to the firm, the heads-up display will be able to show battle-critical information like ammo counts, field maps and teammate locations. The device itself is running a version of Android and is packing a 1GHz dual-core processor, Bluetooth 4.0, WiFI as well as GPS. The mask, meanwhile, comes with dual-pane lenses that prevent internal fogging and a lower skirt that encourages ball bouncing. We don’t know yet how much the device will set you back, and the company has also been a little tight-lipped about when we can expect shipments to begin. For the former, Oakley’s Airwave retails for around $649, while the Snow2 smart glass insert on its own is $399, so we’d guess $500 is a reasonable amount of cash to start saving.

A Few Things You Should Know About the "Darkest Material Ever...