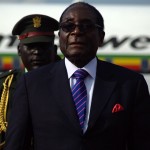 Zimbabwe’s dictator Robert Mugabe unleashed a storm of brutal, genocidal violence after losing the 2008 elections — and now we know that it was funded by western hedge-funds and banks, led by Och-Ziff Capital Management, the largest publicly traded fund, with assistance from Blackrock, GLG Partners, and Credit Suisse, who raised $100M for Mugabe’s weapons and torture-chambers in exchange for a sweetheart deal on the country’s platinum mines. Read the rest