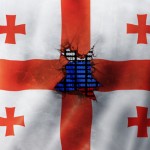 Aurich Lawson On October 24, the country of Georgia took an unusual step: it posted to the Web a 27-page writeup  (PDF), in English, on how it has been under assault from a hacker allegedly based in Russia. The paper included details of the malware used, how it spread, and how it was controlled. Even more unusually, the Georgians released pictures of the alleged hacker—taken with his own webcam after the Georgians hacked the hacker with the help of the FBI and others. The story itself, which we covered briefly earlier this week , is fascinating, though it remains hard to authenticate and is relayed in a non-native English that makes for some tough reading. But what caught my eye about the whole cloak-and-dagger tale is the broader points it makes about hacking, jurisdiction, and the powerful surveillance devices that our computers have become. It’s also an example of how hacks and the alleged hackers behind them today play an increasing role in upping geopolitical suspicions between countries already wary of one another. Georgia and Russia have of course been at odds for years, and their conflict came to a head in a brief 2008 war; Russia still maintains a military presence in two tiny breakaway enclaves that Georgia claims as its own. Read 29 remaining paragraphs | Comments

See more here:
How Georgia doxed a Russian hacker (and why it matters)